🚩 Red flags are warning signs. 🚩They signal the demise of the debt-based global currency system and the transition to something new. This page will be updated with evidence that confirms or refutes the Superbubble worldview. 🚩

Russian President Vladimir Putin spoke at length at the Valdai Club, Sochi. This short video clip contains comments on how the US is 'shooting itself in the foot' by weaponizing the dollar, and the possibility of 'friendly' nations putting together currency alternatives.

Regarding using the dollar in global trade … The president of France talked about this recently. He said that Europe must increase its economic and financial sovereignty. What does that mean? That means de-dollarization. And Europe is the biggest trade partner of the US.

We need another global trade system, apart from SWIFT, which is the current global transaction system. That’s why more and more companies chose national currency payments.

It won’t happen overnight. Our oil and gas companies aren’t ready to give up dollar payments and switch to national currencies. But if we manage to de-dollarize our trade and get rid of the volatility of national currencies, we’ll move in that direction. As soon as it happens, the dollar as  universal payment unit will have a difficult time.

Within the BRICS framework, we’ve created a national currency pool. A joint bank and so on. I won’t go into details, but we have created certain plausible instruments with some countries, that will help reduce the risk.

We keep moving in that direction, not because we want to undermine the dollar, but to establish our security. We’re always getting new sanctions.

They deny us an opportunity to work with the dollar. That’s why we reduced our dollar reserves. The central bank had to take care of that.

Why are they doing that? Can’t they pursue their goals without undermining trust in their nation currency? That would be smarter. Still, the US keeps going down that path. I believe that’s a big mistake.

Putin's invasion of Ukraine and the sanctions that followed have accelerated discussions of an alternative to the US dollar as world reserve currency. The list below will updated as necessary.

Erdogan on the 'post-dollar' world

2022-03-07 – After talks with Russian President Putin, Turkey's President Erdogan said Russia could use the 'dollar, euro, ruble, gold and yuan in trade'.

Autocrats building their own monetary system

According to Simon Hunt:

If I read between the lines of the Eurasian communique. I think the new block is actually bringing gold back into the into the system. which obviously would be extremely attractive for Gulf countries.

Gazprom does not want dollars

2022-03-22 – Rumours are that Gazprom is asking GAIL/India to pay for gas imports in euro rather than dollars. If true, this is a major signpost on the way to a new monetary order.

2022-03-27 – According to Sergey Glazyev, Financial Council of the Bank of Russia: "This kind of event occurs about once a century … We are working on a project for an international treaty on the introduction of a new world settlement currency pegged to the national currencies of the participating countries and to exchange commodities that determine real values. We won’t need American and European banks … The era of liberal globalization is over. Before our eyes, a new world economic order is being formed in which some states and private banks lose their private monopoly on the issue of money”. Sergei Glazyev

2022-03-30 – Russia's Foreign Minister Lavrov, during a visit to China, says that Russia, China and "sympathizers will move towards a multipolar, just, democratic world order", in a video released ahead of meetings with Chinese Foreign Minister Wang Yi.

2022-03-25 – Indian Express Newspaper: India’s independent position on Ukraine is a message to China that India would withstand US pressure, which can pave the way for an informal Russia-China-India political axis.

Sovereignty cannot be 'tied to the dollar'

2022-04-26 – Nikolay Patrushev, Secretary of the Security Council, said Russia is working on linking the price of the ruble to bullion and other commodities. "*To ensure the sovereignty of any national financial system, it is necessary that its means of payment have intrinsic value and price stability, and is not tied to the dollar".

Latin America cannot 'depend on the dollar'

2022-05-05 – Brazil’s former President, Lula Da Silva is due to fight the national Presidential elections in October this year. He might not be an autocrat, but his manifesto states “We are going to create a currency in Latin America, because we can’t keep depending on the dollar.”

2022-06-22 Ahead of the Eastern Economic Forum in Vladivostok (September 2022) Russian President Putin sent greetings to the participants and outlined work on the currency alternative to the US Dollar:

Entrepreneurs of our countries are forced to develop their business in a challenging environment when the Western partners neglect the basic principles of market economy, free trade, and inviolability of private property. They follow, in fact, an irresponsible macroeconomic course, including the launch of the “printing press” – uncontrolled emission and accumulation of unsecured debts.

Together with BRICS partners, we are developing reliable alternative mechanisms for international settlements. The Russian Financial Messaging System is open for connection with the banks of the BRICS countries. The Russian MIR payment system is expanding its presence. We are exploring the possibility of creating an international reserve currency based on the basket of BRICS currencies. 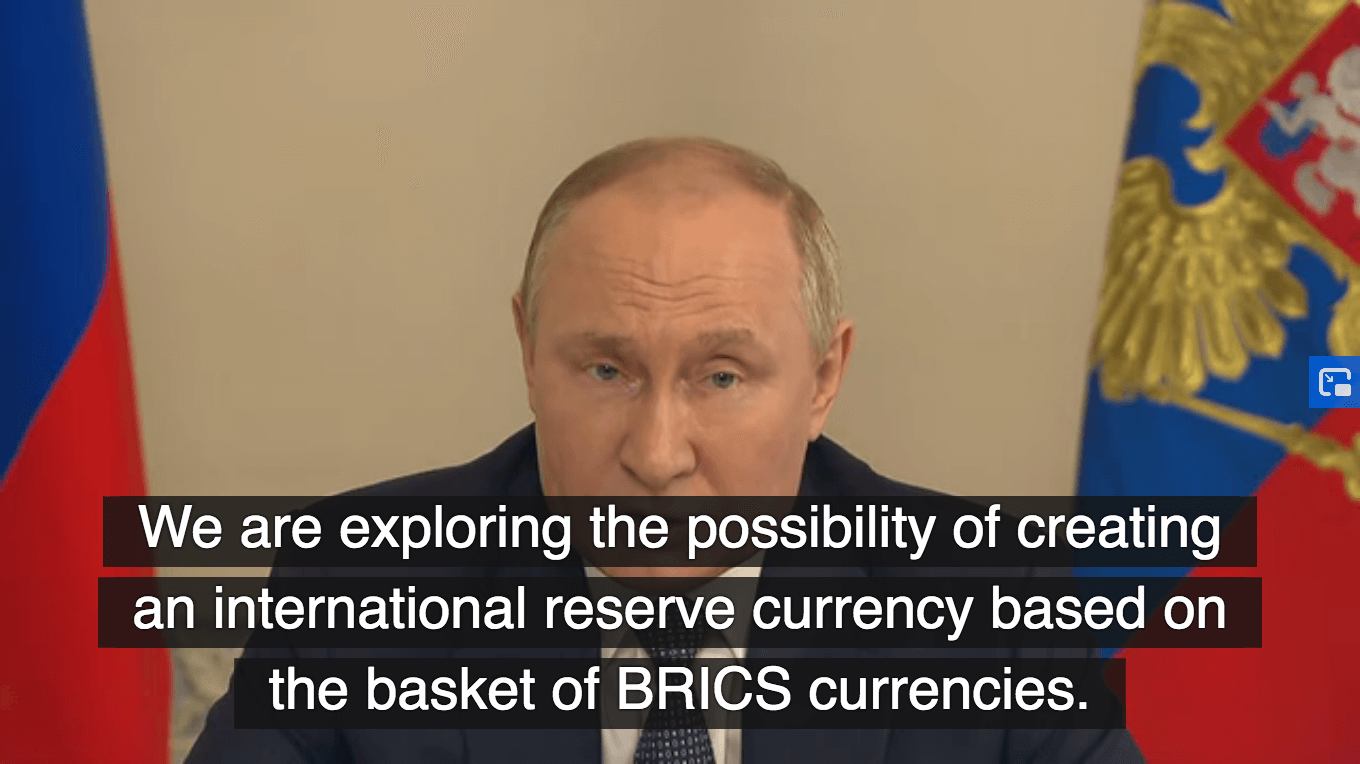 2022-06-17 Russian President Vladimir Putin on the end of the US dollar as world reserve currency. Highlights from his speech at SPEIF.

Under the cloud of inflation, many developing nations ask a good question: why exchange goods for dollars and euros that are losing value before our eyes? The conclusion suggests itself: the economy of mythical entities is inevitably being replaced by the economy of real values and assets