🚩 Alarm Bells are warning signs. 🚩They signal the demise of the debt-based global currency system and the transition to something new. This page will be updated with evidence that confirms or refutes the Superbubble worldview. 🚩

Sanctions and war split the world

In his 2022 State of the Union speech, US President Biden described Putin's war in Ukraine as the start of a:

Battle between democracy and autocracy. Democracies are rising to the moment, and the world is clearly choosing the side of peace and security.

The map below shows the nations imposing economic sanctions on Russia in response to the war in Ukraine.

Contrary to what we are told, the majority of the world has not lined up against Russia. And it's bigger than that. In ongoing 'whirlwind' tours. the world's autocrats are busy realigning economically, politically and militarily in opposition to the West.

ASEAN Nations "refuse to choose" between the US and China

ASEAN* member states — including Singapore — want to maintain good relations with both the US and Beijing. And in our view, a more stable and constructive and peaceful configuration is for both the US and China to have overlapping circles of friends. Now this concept of overlapping circles of friends bears elaboration, we are not interested in dividing lines, in Asia. Don't make us choose. We will refuse to choose

Russia and China ditch the dollar AND euro in gas trading

2022-09-06 — Gazprom signs gas deal with China to convert payments to rubles and yuan
Gazprom (a Russian state-owned energy corporation) announced it had reached an agreement with China to start fulfilling its gas supply contracts with payments made in rubles or yuan instead of euros or dollars.

The announcement comes just six months after a 30-year deal was signed between Gazprom and the China National Petroleum Corporation in early February, which said Russian gas supplies would be paid in euros as Russia looked to separate itself from the U.S. just weeks before it invaded Ukraine.

EU leaders fear loss of African loyalty, and want to 'buy' it back

2022-07-22 — As Europe and Africa take opposing sides over the war in Ukraine, EU diplomats argue for a more “transactional” approach to foreign aid that would tie funding for African countries to their willingness to work “based on common values and a joint vision.”

Lavrov thanks the Arab League for their Ukraine stance

2022-07-24 – Russian Foreign Minister Sergey Lavrov explained the latest developments in the Ukraine-Russia crisis to the Arab League Council in Cairo.

2022-07-12 – Iran will be admitted to the Shanghai Cooperation Organisation (SCO) this year, with an agreement to be signed at a summit in Samarkand, in September this year.

The SCO was founded in Shanghai in 2001 by the leaders of Kazakhstan, Kyrgyzstan, Tajikistan, Uzbekistan, Russia and China. It is a Eurasian political, economic and security organization. It is the world's largest regional organization, covering approximately 60% of the area of Eurasia, 40% of the world population, and more than 30% of global GDP.

2022-05-26 – China wants 10 small Pacific nations to sign a major cooperation agreement. Foreign Minister Wang Yi is visiting seven of the countries he hopes will endorse the “Common Development Vision” — the Solomon Islands, Kiribati, Samoa, Fiji, Tonga, Vanuatu, and Papua New Guinea. Micronesia’s president called the draft sent out by Beijing “the single most game-changing proposed agreement in the Pacific in any of our lifetimes.”

2022-05-24 – Sergei Lavrov, Russia's foreign minister said that Moscow would consider offers from the West to re-establish ties and determine whether that is needed, but will focus on developing relations with China.

"If they (the West) want to offer something in terms of resuming relations, then we will seriously consider whether we will need it or not. We must cease being dependent in any way on supplies of absolutely everything from the West for ensuring the development of critically important sectors for security, the economy or our homeland's social sphere".

2022-05-19 – China wants to expand the group of emerging economies known as BRICS (Brazil, Russia, India China and South Africa). According to Wang Yi, China's state councillor and foreign minister:* "China proposes to start the BRICS expansion process, explore the criteria and procedures for the expansion, and gradually form a consensus."*

2022-05-19 – China drums up support for security cooperation in Latin America. Uruguay and Nicaragua endorse an initiative proposed by Xi Jinping … "Security partnerships with Beijing are a new idea for the region".

2022-05-08 – China invited Argentina to attend the 2022 summits of the BRICS economic bloc (Brazil, Russia, India, China, and South Africa). Argentina’s ambassador says it’s a step toward “formal entry” to the grouping, an alternative to the US-dominated financial system.

2022-04-27 – China’s Minister of National Defense Wei Fenghe met with Iranian President Ebrahim Rais, and other officials, in Tehran. They agreed to expand their military cooperation.

2022-04-25 – Headlines about world leaders refusing to take US President Biden's calls about the war in Ukraine. 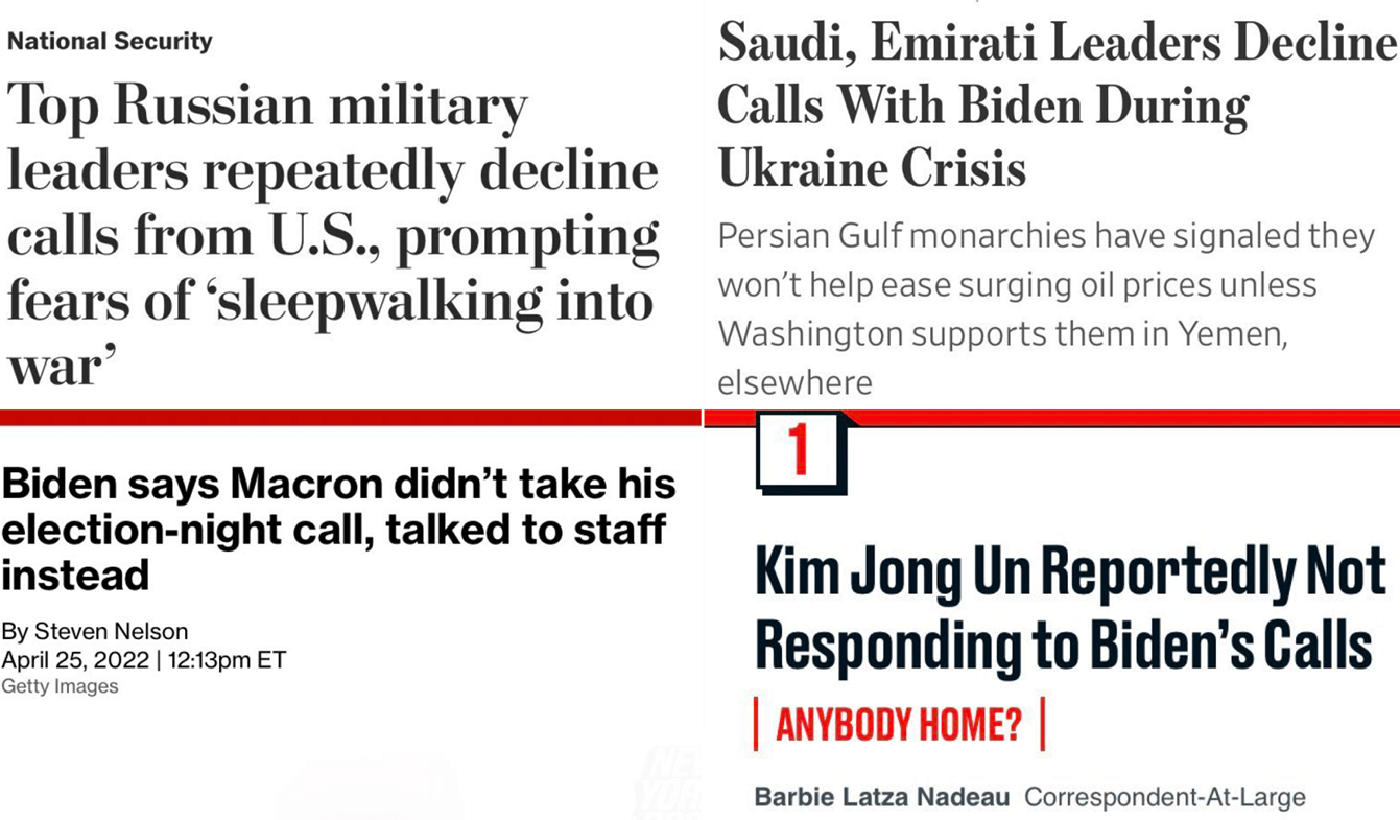 2022–04-07 – Hungarian Prime Minister Viktor Orbán refrains from criticising President Vladimir Putin. Orbán also said he does not agree with sanctions, and broke ranks with the EU preparing to pay roubles for Russian gas.

2022-04-07 – India's Foreign Ministry announced that it will focus on stabilising its economic ties with Russia and is working to devise a payment mechanism to settle trade amid Western sanctions against Moscow for its invasion of Ukraine, the foreign ministry said on Thursday.

The Arab League goes to Moscow

2022-04-04 – Foreign Ministers from six Arab League countries meet with Russian Foreign Minister Sergey Lavrov and other officials in Moscow. Lavrov hopes to discuss "the ongoing crisis in the Middle East & North Africa that is caused by the aggressive policies of a number of countries".

2022-04-02 – India's Finance Minister Nirmala Sitharaman said the decision that India will continue buying discounted oil from Russia as the nation's interest comes first. “I would put my energy security first. If the fuel is available at a discount, why shouldn’t I buy it?” Sitharaman said at the 2022 edition of the CNBC-TV18 India Business Leader Awards in Mumbai".

Lavrov visits the autocrats in Tunxi

2022-03-18 – Bashar al-Assad, President of Syria travels to meet the rulers of Abu Dhabi and Dubai in his first visit to an Arab state since the Syrian war began.

Saudi Aramco will refine in China

2022-03-10 – Saudi Aramco has agreed to develop a huge oil refinery and petrochemical complex in China. The facility will help meet China’s growing demand for energy and chemical products.

2022-03-09 – Saudi Arabia and UAE leaders declined to take Joe Biden’s calls amid fears of a huge oil price spike. The Gulf nations have capacity to pump more oil to ease supply fears, but relations with the US have cooled under Biden.