🚨 🚨 🚨 Alarm bells are warnings. They signal the demise of the debt-based global currency system and the transition to something new. This page will be updated with evidence that confirms or refutes the Superbubble worldview. 🚨🚨🚨

Central banks are the most powerful actors in the global monetary system. They decide what money is, what it is not, and they control how much circulates.

As the major buyers and sellers, central banks control the gold market. At this point in economic history, it might be wise for investors to follow what the “sovereign whales” are – buying gold aggressively and repeatedly.

Gold is the only reserve asset that is free from political and credit risk.

Central banks bought a record amount of gold last quarter as they diversified FX reserves, with a large chunk of the purchases coming from as-yet unknown buyers.
Almost 400 tons were scooped up by central banks in the third quarter, more than quadruple the amount a year earlier. That takes the total so far this year to the highest since 1967, when the dollar was still backed by the metal.

On its own, the gold announcement is interesting; when paired with the mechanisms for international trade settlement in INR (Indian rupees) that the Reserve Bank of India (RBI) announced two weeks ago, the announcement above becomes orders of magnitude more interesting – is India considering using gold to settle INR-denominated trade deficits (which would likely require a “more transparent” (i.e., higher) gold price, since oil markets are some 10-15x bigger than physical gold markets)?

2022-06-30 - The Central Bank of Iraq (CBI) announced a 34-tonne increase in gold reserves. This is their first significant gold purchase for three years and brings their reserves to just over 130 tonnes.
Via Krishnan Gopaul

2022-06-02 – An odd story: Oesterreichische Nationalbank (Austria's central bank) is seven years behind in its plan to move 50 tonnes of monetary gold from London. In an email statement to journalist Jan Nieuwenhuijs, they wrote:

We can confirm that the relocation has been postponed. However, we are not allowed to disclose any details in order to comply with contractual obligations to keep business secrets of external partners involved.

Earlier this year the London Metal Exchange (LME) suspended nickel trading and cancelled deals worth billions of dollars, raising questions about its ability to run an orderly market. Could something similar be brewing in the gold market?

2022-05-25 – Ales Michl, the Czech Central Bank's incoming governor, intends to sharply increase their gold reserve holdings – from 11 to 100 tonnes or more. [via @goldseek]

2022-05-17 – Turkish President Recep Tayyip Erdoğan announced that cheaper housing loans will be provided to those who convert their foreign exchange savings to Turkish lira or sell their gold to the central bank to use in purchases of houses worth up to TL 2 million ($127,150).

2022-05-16 – According to Krishan Gopaul of the World Gold Council: The Central Bank of Kazakhstan added 5.3 tonnes to its official gold reserves in April. Their gold reserves now total 373 tonnes.

2022-04-19 – "Nothing will replace the US dollar. Gold has been replacing US Treasury paper as the primary global reserve asset since shortly after the Great Financial Crisis" —Luke Gromen 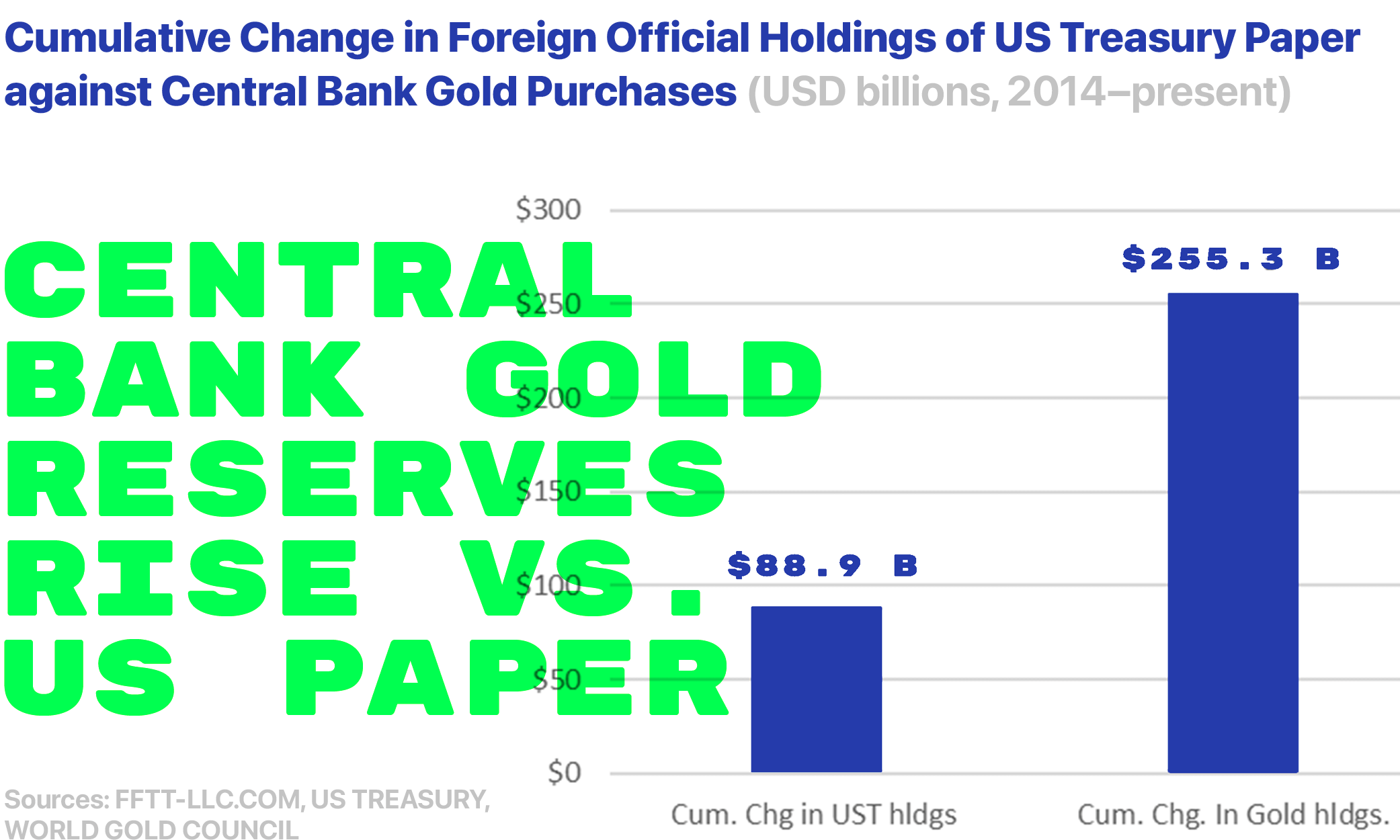 2022-04-07 – A senior Reserve Bank of Australia official will travel to London to check that Australia’s 80 tonnes of gold bullion are still in Bank of England’s vaults. The BoE holds about 6400 bars on behalf of the RBA, worth about $6 billion.

2022-03-23 – Bank of Russia offers to buy gold in domestic market at 5,000 rubles per gram. With a gram of gold trading then at ~$62 (this implies a RUB/USD rate of around 80.6), RUB/USD has quickly moved up towards this level, strengthening the currency.

2022-02-15 – Deutsche Bundesbank (Germany's central bank) does not rule out gold revaluation: "The more debt accumulated on the balance sheets of European central banks, the more likely they will revalue gold to write off this debt."

2022-01-07 – The Central Bank of Ireland purchased half a tonne of monetary gold in January 2022. An increase of 67% over five months pushed their gold reserves to more than 10 tonnes. 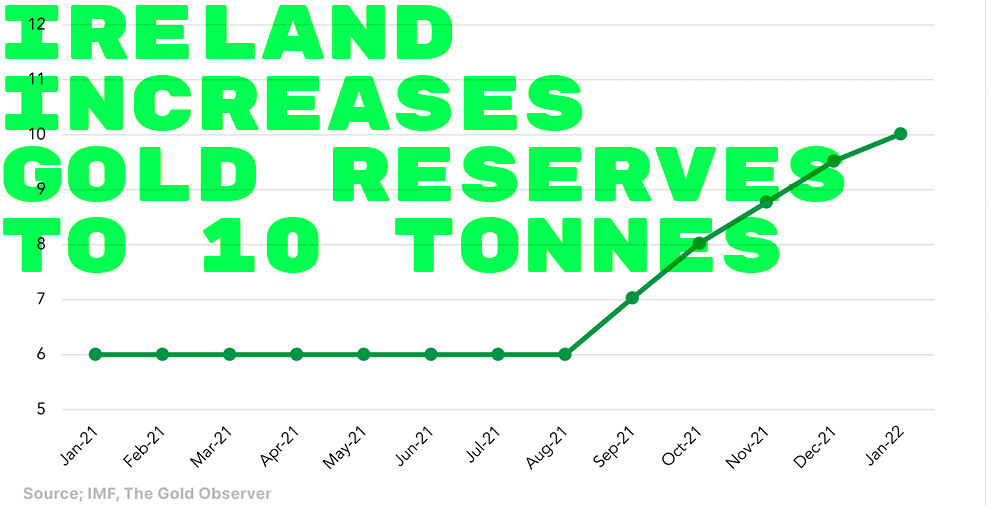 2021-06-21 – The world's central banks bought a net 32 tonnes of gold in June. Brazil was by far the bigger buyer in the month, and several other central banks were active.

2021-06-17 – The Central Bank of Ghana will purchase 8.7 tonnes of domestically-mined gold over the next five years to bolster its foreign currency reserves, according to Governor Ernest Addison.

2021-01-31 – Central banks bought more gold bullion last year than any time since 1971, when the U.S. ended the gold standard. Governments added 651.5 tonnes in 2018, a 74 percent increase from the previous year, according to a report from the World Gold Council.

2019-07-26 – European central banks end a 20 year agreement, saying they have no plans to sell their gold. The Central Bank Gold Agreement (CBGA) was originally signed in 1999 to limit gold sales and help stabilise the market for the precious metal. Through the 1990s, sporadic sales—often conducted behind closed doors by European central banks—drove down prices and undermined the metal’s status as a stable reserve asset. According to the ECB:

“The signatories confirm that gold remains an important element of global monetary reserves, as it continues to provide asset diversification benefits, and none of them currently has plans to sell significant amounts of gold."